Chlorophyll allows plants (including algae) to photosynthesize, i.e., use sunlight to convert simple molecules into organic compounds. Chlorophyll a is the primary type of chlorophyll found in green plants and algae.

Chlorophyll a is used as a measure of the amount of algae growing in our lakes and streams and it is used by environmental agencies to classify the trophic condition of a waterbody. Although algae are a natural part of our streams, rivers, and lakes, too much algae can cause aesthetic problems such as green scums and bad odors, and can result in decreased levels of dissolved oxygen, which can be detrimental to other aquatic life. Some algae also produce toxins that can be of public health concern when they are found in high concentrations.

One of the symptoms of degraded water quality is the increase of algae as measured by the concentration of Chlorophyll a. Waters with high levels of nutrients from fertilizers, septic systems, sewage treatment plants and urban runoff may have high concentrations of Chlorophyll a and excess amounts of algae (https://www.epa.gov/national-aquatic-resource-surveys/indicators-chlorophyll).

While LJEA has not frequently tested for Chlorophyll a historically, in 2018 this measure was added to LJEA’s regimen of water tests primarily because of the elevated orthophosphate levels observed in the North Fork of the Catawba river. (click here to see 2018 observations) While these levels are not above any testing standards set by NCDEQ or the EPA, the fact that they have begun to elevate is a guiding factor in the increased scrutiny of Chlorophyll a levels in Lake James. In this section, observations are based on limited data found in the EPA’s Water Quality Portal on historic Chlorophyll a measures (done by NCDEQ) as well as some of our early results of LJEA’s 2018 Chlorophyll a testing.

Figure 16 below shows Chlorophyll a levels as measured from 2002 to present in six Lake James locations. While the levels measured do not exceed the area of concern of 40 ug/l as discussed above, there is a higher level observed at the westernmost site near the entry points for the Catawba and North Fork rivers (“LKJ West of Moose Lodge” on the chart) . Looking at the overall average for the lake from 1989 forward (see figure 17) there is some minor change over time in overall Chlorophyll a levels in the lake, with a more pronounced increase in Chlorophyll a levels at the westernmost site (“LKJ West of the Moose Lodge” on the chart) through 2017 with a sharp decline in our own 2018 readings to date. While there are some holes in the data available from the Water Quality Portal, this falls in line with the same trends we see for nutrients making their way from the North Fork river.

Overall, there is no immediate concern with Chlorophyll a readings collected to date. However, the data from the North Fork of the Catawba River and the increasing development in the watershed lead LJEA to believe that Chlorophyll a testing in Lake James needs to continue and diligence in watching for early warning signs of an algae bloom or other negative effects of algae in our lake is warranted. 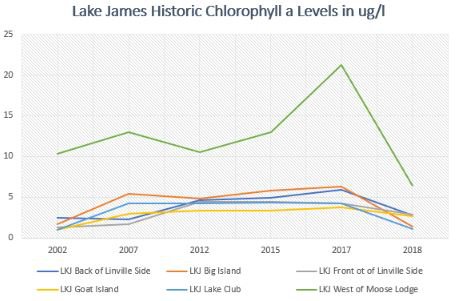 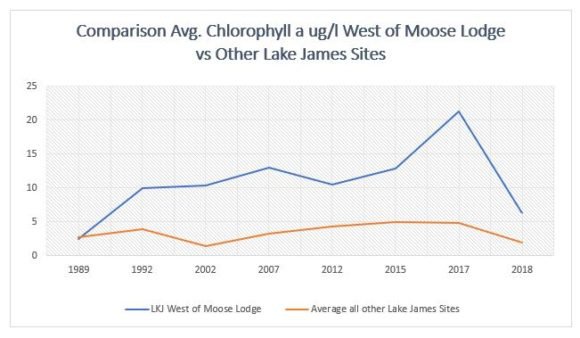 Figure 17. Chlorophyll a levels over time West of Moose Lodge vs all other Lake James sites (Sources: EPA Water Quality Portal and LJEA 2018 Sampling) Expressed in micrograms per liter.