The Lake James shoreline is characterized by its high, red clay cliffs, particularly beautiful when the light from a low sun shines upon them, but the source of much sediment in the bottom of the lake and turbidity in the water.  Although erosion directly into the lake is a longstanding concern with lakeside property owners and everyone that enjoys the lake, LJEA has found very little data to help quantify the erosion rates or impacts. There are several factors that contribute to the problem, including natural conditions, poorly managed development, heavy boat traffic, and lake operations.

Natural Conditions:  Many of the ridges that comprise the Lake James shoreline are very steep and have layers of clay and silty loam soils. The steepness of the ridges make them susceptible to slumping and slides. Often a layer of silty soil underlies layers of clay along the shoreline and, during wet weather, the silty soil will have large amounts of water moving through it.  That water movement can cause the layer to fail, causing the entire section of clay above it to slump or slide into the lake. When the banks are left without vegetation, direct exposure to wind and rain further erodes the shoreline.

Development: Although there are regulatory requirements to leave undisturbed riparian buffers along the lake and to control on-site erosion during development, those requirements are sometimes ignored, or the controls poorly implemented.  That allows large amounts of eroded soil to directly enter the lake, increasing turbidity of the water and affecting lake habitat and inhabitants. Often it will take a long time to stabilize such a site, resulting in damage accumulating over a long period.  Without careful planning and design for roads and buildings, the impervious area produced by development can cause the formation of gullies which may continue to erode the upland and lakeshore for years. 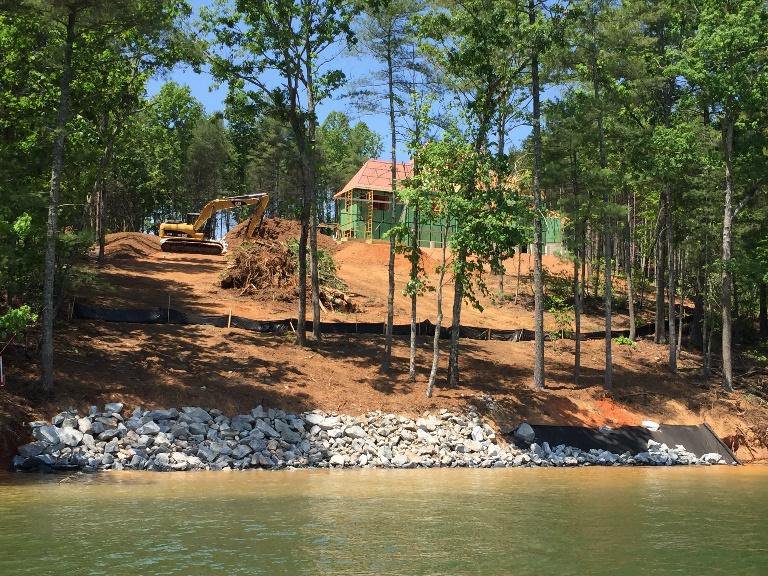 As noted in the Land Cover section of this report, the area immediately adjacent to Lake James has seen considerable amounts of deforestation and development over the past two decades.  That development has contributed to the degradation of water quality in Lake James and to the aesthetic issues associated with boating and swimming in turbid water. 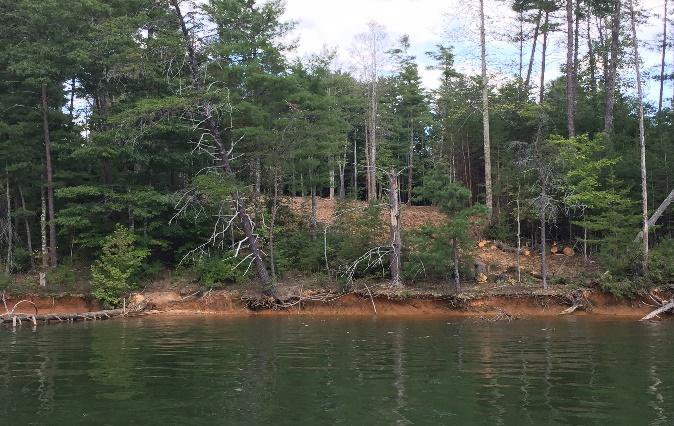 Boat Traffic:  Lake James is one of most heavily boated lakes in western NC.  The wakes caused by boats moving in the lake, particularly in the narrow coves, are responsible for much of the direct erosion into the lake. As noted above, the natural conditions and topography of Lake James make it particularly susceptible to shoreline erosion.  As boat wakes erode the base of the lake’s cliffs, large volumes of the overlying material will slump into the lake. The problem is exacerbated by the fact that many of the steep ridges continue downward into very deep water, making it very difficult to use riprap or other materials to effectively protect, or armor, the toe of the banks. The recent popularity of “wake boating” is increasing the rate of erosion of the Lake James shoreline.

Lake Operations:  Lake James was constructed, and is operated, for the purposes of hydroelectric power production.  Over the past 100 years its operations have been modified to recognize the value of the lake for water supply, flood control, and recreational uses.  Duke Energy operates the lake under a license from the Federal Energy Regulatory Commission (FERC). The operation is coordinated with both the need to produce electricity and the operations of an entire chain of lakes down the Catawba River valley.  The following figure illustrates the Lake James water levels between November 2017 and December 2018.

Notice from the figure above that the Lake James water level varied over eight feet during this period. Some years it varies significantly more.  The green line in the figure shows the “target” that Duke attempts to maintain the lake at during various times of the year. The blue line represents the minimum level that Duke will purposely draw down the lake without a request for a specific, temporary exemption (for example to work on a dam or intake) or during a sustained drought.  The fact that the lake levels vary so much, even during a “normal” year, increases Lake James’ shoreline erosion. This is due to several factors: